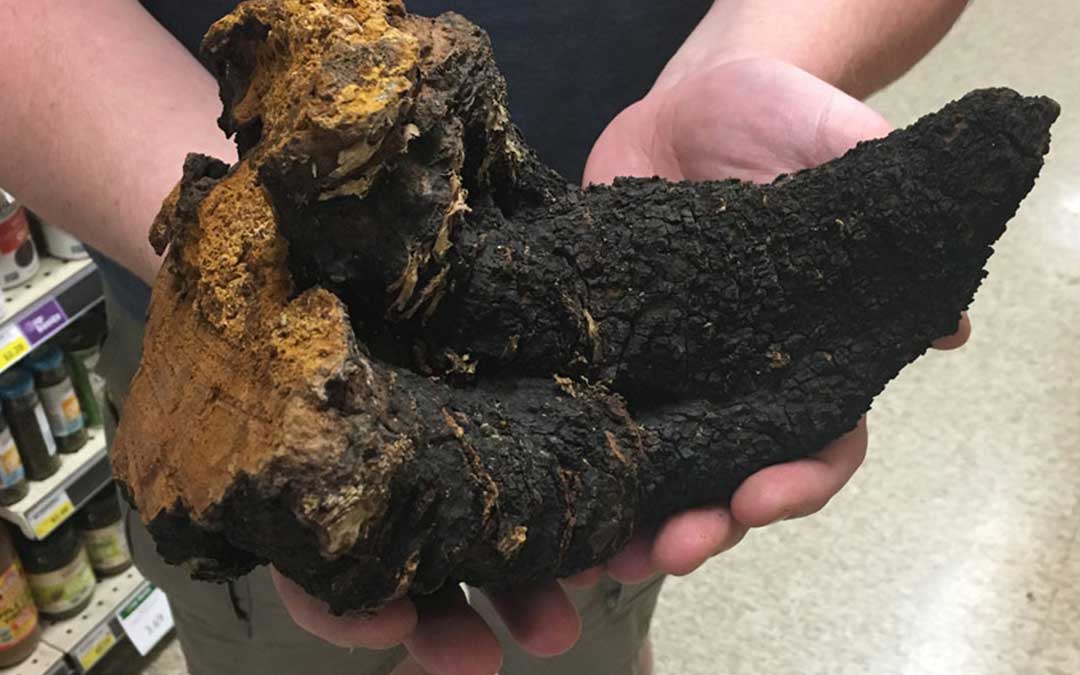 You’ve probably heard of Chaga mushrooms, due to the growing popularity of it as a superfood but, have you ever wonder what the benefits of Chaga are? Nothing is called a superfood unless it’s jammed pack with nutrients, vitamins, and improves your overall health. While it’s true they do that, there are specific benefits of Chaga mushrooms that will have you running down to the store to get some.

There are many reasons why we’ve included them in our mushroom coffee but, before we get into the 5 benefits of Chaga let’s discuss what Chaga is.

Chaga mushrooms are a kind of fungus that grows on birch trees and found in colder climates. They look like a kind of lump of charcoal and seems like a woody knot growth but, underneath their unappetizing appearance is a soft orange interior. Chaga has a long history in folk and herbal medicine, mainly in Russia and Northern Europe due to where it grows. Now, it is being studied extensively and the benefits of Chaga are being demonstrated scientifically.

One of the greatest benefits of Chaga mushroom is the almost endless amounts of vitamins and minerals in them:

It goes on and on. It’s almost an all in one vitamin growing on the side of a tree. No wonder it has been used in herbal medicine for centuries and its status as a superfood is one of the main reasons we use it in Defiant Coffee. Adding a superfood to your morning brew is a great way to boost your wellness, especially since almost everyone has at least one cup of coffee a day. Though, it’s not enough to list what’s in them. What do these minerals and vitamins mean for you? That’s up next!

In several animal studies, Chaga has shown to help boost the immune system by promoting the production of cells that help regulate it. In effect, one of the benefits of Chaga is that it aids in helping fight infections whether it’s the common cold to something more life-threatening. Imagine that in your morning coffee you’re boosting your body’s defense. That is quite the way to start your day!

Chaga mushrooms are so rich in antioxidants that it gives coffee a run for its money. Many of us have heard that antioxidants help fight the growth and spread of cancer cells, so the richer something is in antioxidants the better you’re protecting yourself, right? While it’s still being researched but, the studies are quite incredible. Having these benefits of Chaga mushrooms in your diet goes without question. Whether you ingest them in mushroom coffee or as a supplement, fighting cancer is just a good idea. Though, why pop a vitamin when you can just add it to the antioxidants already in your morning brew?

Many animal studies have come out showing that one of the benefits of Chaga is that it lowers blood sugar and may help manage diabetes. One study even showed a 31% decrease in 3 weeks! While it hasn’t been studied in humans yet, it is a promising sign that Chaga may help with insulin resistance. Though, as with any medical condition and supplements, always check with your doctor.

Having Chaga mushrooms in your diet may help reduce the risk of heart disease by lowering your LDL, or bad, cholesterol. In several studies, it was shown to not only reduce the LDL cholesterol but increase the HDL, or good, cholesterol too! More research is needed to see if it has the same effect in humans but, the potential is promising. So, when enjoying a cup of mushroom coffee, you may be getting heart help as well.

The Benefits of Chaga Are Myriad

These 5 benefits of Chaga are only a small peek into this superfood and it was plenty reason for us to make Chaga mushroom coffee. Coffee in and of itself has plenty of antioxidants and benefits to your health but pales in comparison to Chaga. The best part is that when you enjoy Defiant Chaga coffee, you don’t even taste the mushroom! All the benefits of Chaga with the same great coffee taste. Your morning perk reinvented to help you further fight cancer, boost your immune system, lower blood sugar, and reduce bad cholesterol.

If Chaga mushrooms are a superfood then, using it to make mushroom coffee means Defiant is a supercoffee. Give mushroom coffee a try and feel all the benefits of Chaga in your morning brew.