What is Chaga Coffee – Aka Mushroom Coffee?

Chaga mushroom coffee is a coffee that blends beans with Chaga mushrooms. Why would you do that to the noble coffee bean? Because you get the benefits of Chaga  along with your coffee, that’s why!

Chaga has been used in traditional medicines for centuries. Their health benefits are now becoming far better understood and they are – without a doubt – a superfood with few peers. Here’s a bit more on why you should consider our coffee blends. 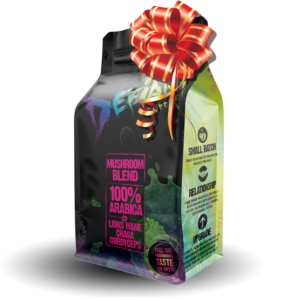 Antioxidants are a powerful micronutrient that helps clear the body of free radicals. Various foods have been identified as being antioxidant-rich, leading some to become wildly popular almost overnight. Red wine, for instance, is known to contain antioxidants. Dark chocolate is another.

One of the best-known, of course, is that acai berry, which shot to prominence within the past few years. All of a sudden, acai berries were everywhere and in virtually everything, from energy drinks to salads and so on.

Antioxidants are measured by absorption capacity, or in other words the amount of oxidized free radicals they can bind with and clear from the system. It’s measured in micromoles per 100 grams of the substance – berries, wine, chocolate – in question.

The acai berry has an oxygen radical absorption capacity of 18,500 micromoles of oxygen radicals per 100 grams of berry. This is impressive, to be sure; that’s a powerful capacity for binding with and absorbing oxidized free radicals in the system.

Chaga mushrooms, however, have an ORAC of 52,500 micromoles per 100g, one of the most potent antioxidant foods on earth. Combined with the antioxidant properties of coffee…that’s a health tonic with few peers for fighting free radicals.

Defiant coffee as a Nootropic

If you’re concerned that the chaga coffee blend of chaga mushrooms will give you the coffee jitters but super styled, we have some good news for you. The amount of caffeine is cut down dramatically in Defiant Coffee without cutting down on the stimulation. That is one of the reasons we’ve made the chaga coffee, it’s a better morning waker-upper that won’t make you look like a shuffling cartoon.

We’re not trying to double down on your morning brew and send you off shaking. But, coffee is often that extra perk needed at the start of your day and that’s why chaga mushrooms are a great addition to a lower caffined coffee. Speaking of perks, there are plenty of mushroom coffee benefits that go beyond the chaga coffee.

Chaga mushrooms are also one of the most powerful natural nootropics available. Besides lowering oxidative stress on the brain through its antioxidant properties, Chaga mushroom extracts have been shown to increase acetylcholine levels.

Acetylcholine is a neurotransmitter, acting on the brain and also the muscles through the neuromuscular junction controlling skeletal muscles, which are the muscle groups that are controlled through conscious action rather than via autonomic function. In addition, acetylcholine helps stimulate arousal, attention, motivation, and memory.

All the things you need to get things done. Along with the effects of caffeine, Chaga infused coffee is as you can get a super brew.

Want to stimulate your brain in a way that just isn’t possible with Starbucks? Defiant Coffee has what you’ve been (see what we did there?) looking for Defiant Coffee Mushroom Blend.

Not only do we include Chaga, we also include Lion’s Mane and Cordyceps mushrooms as well. This creates a powerful blend of coffee, packed with antioxidants, nootropic and other healthy, stimulating compounds for a brew that will get your day started right or keep you operating at peak capacity. Along with the mushroom blend, we also include 100 percent small batch Arabica beans.

Our Mushroom Blend is one of the few things that taste incredible while being incredibly good for you. Once you have a cup, you’ll see just how powerful mushroom infused coffee can be!